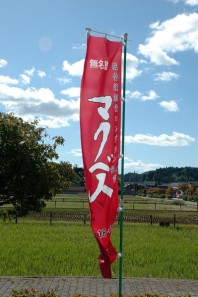 his castle hath a pleasant seat;
The air nimbly and sweetly recommends itself
unto our gentle senses.” –  Shakespeare’s Macbeth

Pleasant seat indeed; The quiet village of Nakajima in Nanao, Ishikawa Prefecture is too lush, too green, too gentle to ever be compared with the rugged coast of Scotland.

There is little in the pastoral scenery to prepare us for the tragedy that unfurls every evening on the stage of the Noto Engeki Do theatre.

Not far from the town we did come across an imposing relic of a home that may well be possessed by the ghosts of local yore; but nothing so melancholy as to befit the doomed Scottish King.

Walking through the Nakajima’s deserted, neglected streets, we saw that none of the theatre’s glitter fell on the neighboring community.

We left the empty business street, passed a temple and crossed the narrow river over a quaint bridge whose peeling red paint spoke of the hope the theatre’s opening must have promised some 16 years ago.

On the north bank we spotted the graceful figure of a young woman standing in front of a store in the middle of a rice field.  The shop was modern but the banners hanging from the entrance proclaimed it to be the Serimoto traditional sweet shop.  The smile the girl gave us and our two dogs was so disarming that I didn’t hesitate to cross the street and approach her.

I was glad I did; Miss Serimoto and her equally charming mother told of how they had had to relocate closer to the grand theatre to keep their 5th generation business from going the way of the other dilapidated shops in town.

After a pleasant chat on the local history, a rich cup of coffee, and an even richer box of omiyage, we left the ladies and made our way to the renowned theatre where the quiet rural atmosphere was suddenly replaced by a cacaphony of  fashionable theatre-goers.

Here it was, the event that brought us to this lovely peninsula on the far side of Japan’s main island.  The theatre was the brainchild of Nakadai Tatsuya, Kurosawa’s favorite villain.  He purportedly had the theatre built to help revitalize this neglected but beautiful part of the island.  Ironically, because of the improved highways that assure  a full house for every performance, the Japanese (with their one-track mindset) zip in and out in their buses and cars, most often without spending one yen in the local shops.

The performance of Macbeth was impressive.  Unlike the Japanese production of Fiddler on the Roof we saw in Tokyo,  Macbeth loses nothing in translation. Nakadai and his leading lady were convincing as the repentant evil doers.  The only thing about the production that bothered me was that, because of his age  (76), Nakadai was on mike. This actually worked quite well in his dialogues with the wired Lady Macbeth, but presented an uncomfortable disharmony with the rest of the troop who bellowed in exaggerated Kabuki-like stage voices.

The real scene stealer was the stage itself; equipped with a trap-door along the entire back wall, Macbeth’s entrance and final slaughter are performed au naturel with actual horses and soldiers riding right up to the stage.  At first I thought this gimmick was a little Disneyesque, but then I thought about how the bard was such a ham and I decided he would have loved this over-the-top audience pleaser.

Our hopes to finish out the evening at a quaint local food shop were quickly dashed when we walked out of the bright lights of the bustling theatre and into the darkened streets of the deserted town. We too had no choice but to jump straight on the highway and begin our 500 kilometer trip home.

Autumn on the Noto Peninsula

Autumn in the Mountains of Gifu

The Noto Peninsula on the Sea of Japan

The Noto Peninsula lies some 500 kilometers northwest of Tokyo, that computes to about $200 in gas and an equal amount in tolls round trip normally, putting it out of our reach for the past 35 years.  This year the new discount highway policy reduced the tolls to $50.  So we were off to the long forbidden “dark side”  of the island.

Evidently, the area’s nickname does not apply in the autumn, at least not during our two-day sun-drenched stay.  The scene along Chirihama beach drive rivaled that of Malibu or Daytona Beach.

A few kilometers inland we stumbled upon the serene grounds of the 13th century Myojoji Temple with its five-story pagoda. I have visited too many shrines and temples to be easily impressed, but this ancient Nichiren retreat was bathed in an unusually pleasing aura of serenity – or was that just Amaterasu’s autumn smile sedating us again.  When I later inquired as to how this seemingly precarious structure survived so many earthquakes over the centuries, I was amazed to find that it acts like one of those jiggle heads people put on the car dash; each story moves in a different direction sending the kinetic energy into the center where it dissipates harmlessly.

Our Alpha Romeo was right at home on Noto’s famously winding roads, which were as clear and dry as the sky overhead. All along the way we encountered bikers giving their machines a chance to perform as they were meant to. (I later found out the great roadways were paved with pork – politically speaking – provided by local politician and former Prime Minister Yoshiro Mori.) But even under these ideal driving conditions, I was beginning to get a little weary when, after 16 hours of nearly constant driving, we finally reached our minshuku at the tip of the peninsula. The payoff was dropping to sleep at the ungodly hour of 8pm – after a solitary onsen bath and a scrumptious seafood dinner – which allowed me the rare pleasure of walking the dogs on the beach at sunrise.

Autumn in the Mountains of Gifu