The Internet disseminates information with lightning speed; but sometimes it is timeless, literally unmarked by time or date. Undated stories can circulate through the web for years posing as news.  I got one of these from my sister Nikki today, but I am posting it anyway – the content will explain why.  Being more cautious than Oprah, I confirmed the story with Snopes.com to avoid passing on another annoying hoax. 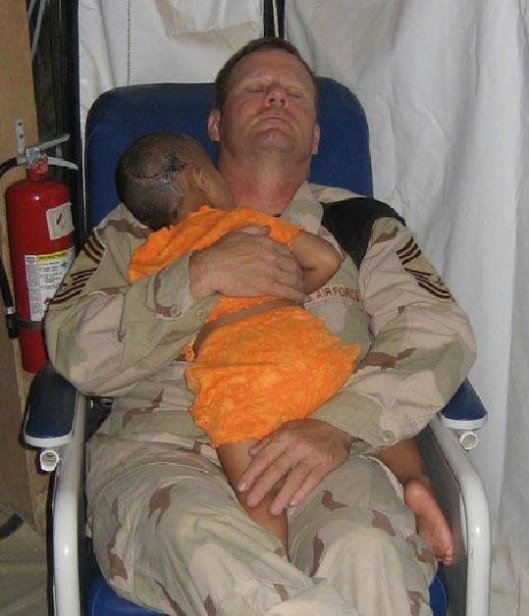 This now famous 2006 photo shows Chief Master Sergeant John Gebhardt holding a small Iraqi girl at a U.S. Air Force medical center in Iraq. The story reports that the infant received a head wound when insurgents attacked her family, killing everyone except her. She was responding well to treatment at the center but continued to cry and moan. The medical staff reported that SGT Gebhardt was the only person able to calm her down, and that he spent four nights holding her while they both slept in a chair.

The author applauds him as “a real Star of the war” who “represents what America is trying to do.” The sad truth is that the U.S. is also responsible for the suffering of thousands of innocents. It is nice to see a case where that evil is bested by good.

The coverage this minor story continues to receive on the Internet is remarkable.  It is also revealing to find that in spite of that popularity,  it seems to have been ignored by the press, except for a story in a military publication.

When I served in Vietnam I realized that war brings out the worst and the best in man; and as a newsman, I found that only the worst gets published. There is too much bad news and not enough good news, which only contributes to the myth that evil prevails. Usually there’s a good reason for that; stories of good put the reader to sleep, while stories of evil get the blood circulating. Ironically, this story of putting a child to sleep pumps the blood up.